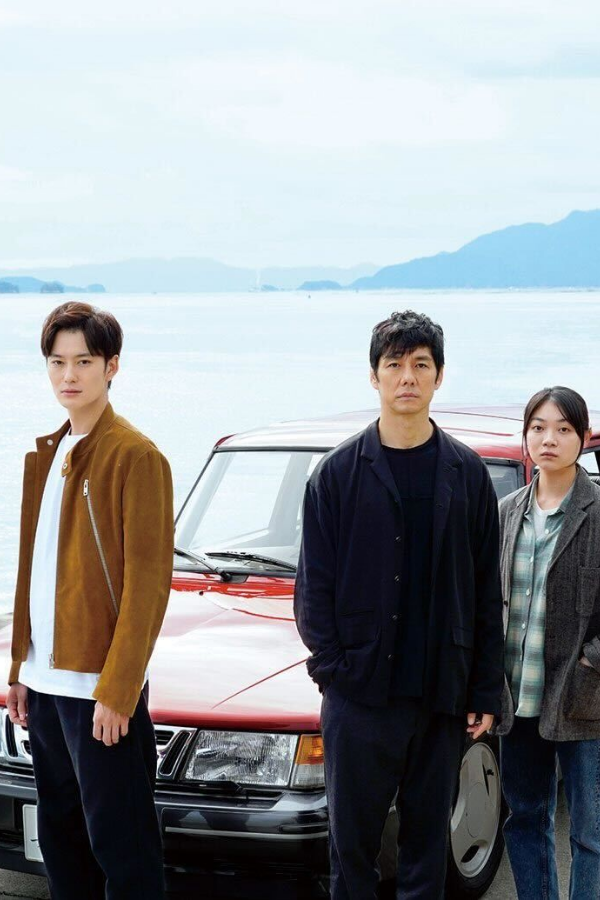 “Life in the Rear-view Mirror”

When a movie has a title with the word “drive” in it, audiences expect highspeed chases, acrobatic escapes, and catastrophic car crashes. Ryûsuke Hamaguchi’s elegiac Drive My Car has none of those physical actions, but it will definitely carry viewers along on an emotional ride, with lovers trying to chase memories and escape regrets, only to experience catastrophic psychological impacts in the end. With a screen time of over three hours (still shorter than Hamaguchi’s 2014 Happy Hour, which runs over five hours!), the laconic movie rarely wastes a second as it meticulously creates a melancholy world and carefully situates its characters in it.

The film weaves together three short stories about marriage and infidelity by novelist Haruki Murakami from his 2014 collection Men Without Women. The story “Driving My Car” tells of the enigmatic relationship between a male actor and his female driver, bound together by loss and sorrow. The actor has suffered the death of a child, his wife’s adultery, and her sudden death; the driver has experienced an abusive childhood and paternal abandonment. In “Kino,” a man also confronts his wife’s infidelity, finding himself pursued by shadowy figures, struggling to deal with emotional pain, and slowly losing his sense of self. Finally, “Scheherazade” features a narrator who has been confined for reasons that remain unexplained. He has a sexual relationship with a woman who tells him stories, though he cherishes the imaginative and poetic stories more than the physical contact.

The cinematic adaptation of Drive My Car begins with a forty-minute segment – up to the delayed opening credits – that incorporates most of these story elements. The main character, an actor (Hidetoshi Nishijima), prepares to direct a production of Anton Chekhov’s play Uncle Vanya. Rehearsals take place at a theatre in Hiroshima, where cinematographer Hidetoshi Shinomiya shot much of the movie. The actor, while being driven to and fro by his new driver (Tôko Miura), listens to tapes made by his deceased wife (Reika Kirishima) reading from the play. The script, which Hamaguchi co-wrote with Takamasa Oe, uses physical objects – the car, the voice recordings – to link husband and wife, and to carry the audience from present to past.

Uncle Vanya’s lines offer a sometimes poignant, sometimes ironic counterpoint to the main action of the film’s “real” characters. The play provides narrative and thematic focus as it tells of failed love and squandered opportunities, presenting life as empty and repetitious. Chekhov’s characters share with the actor a sense of regret for past actions and indecision about the future. Memory and futility overwhelm them. A scene from Samuel Becket’s Waiting for Godot also injects an element of existential angst.

The Chekhov production, quite avant garde, features actors performing in various languages, including Japanese, Korean, Mandarin, and even in Korean sign language. At first, this feels a bit chaotic, but it quickly becomes quite powerful as the viewer’s attention moves from the spoken – and in some cases signed – dialogue to the actors’ faces and performances. (English subtitles clarify the action, of course.) The play’s linguistic diversity dramatizes the potential for miscommunication, just as failures of understanding created problems for the actor and his wife, and for all people in real-life relationships.

Although much of the action takes place inside a car, Hamaguchi uses the sense of claustrophobia that setting sometimes induces to force audience attention onto the actors’ faces and words. Moreover, shots beyond the car invite the eye into the outside world, city and country, where people seem insignificant and humanity often disappears entirely.

Drive My Car boasts many fine sequences, nicely shot by Shinomiya, but three demand special attention. The first, just after the midpoint, takes place in a high-tech waste processing plant. Against a background of surprising and sometimes beautiful visuals, the chain-smoking driver and abruptly paced dialogue evoke Jean Luc Goddard as people, trash, and machines come together in a hard, linear world.

In a later sequence, sound blurs as the car speeds through a tunnel. The car exits the tunnel into a rainy night and a sound bridge of rain links to the sounds of water against a ferry’s hull as we cut to a shot at sea. The camera then moves up and studies the characters from above, the ferry’s bright red guardrail the only element of color in the shot. Quite effective as images of connection/separation.

A final detail to watch for. Throughout the movie, the driver (played with an enormous sense of humanity and vulnerability by Miura) has a facial scar that offers a key to her personality. In the film’s final sequence, set in present day (everyone’s wearing anti-COVID masks), the driver seems to have arrived at a new place in life. A closeup of her face shows the scar almost – perhaps entirely? – invisible, an evocative symbol of character’s growth and change. Note that the driver, not the actor, appears in the last scene, shifting the narrative emphasis from him to her. Despite centering on the actor throughout, here we see the driver’s story, or rather, the story of how the actor’s life affected hers? After all, it is her closing words to him that reverberate in our memory as we leave the theatre.

Although Drive My Car deals with dark subject matter, it remains surprisingly non-judgmental and winds through a complex and perplexing labyrinth of raw human emotions. The driver at one point admits that she hated her mother, but then clarifies that hate wasn’t the only emotion she felt toward her. People are not good or bad, but good and bad, both loving and unfaithful, affectionate and cruel, changing from one moment to the next.

Catch the film and keep an eye out for it at the Oscars – the critical buzz suggests that it will bring home some awards.