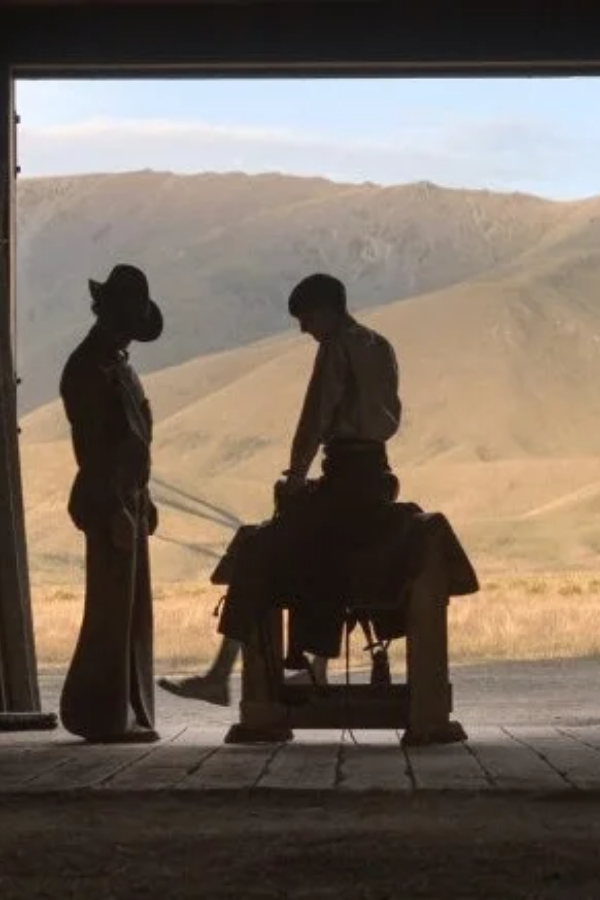 (The Power of the Dog and Macbeth)

Okay, let’s just get the awards buzz out of the way right up front. Both The Power of the Dog directed by Jane Campion and Macbeth directed by Joel Coen are going to receive oodles of Oscar nominations and will likely win a few. Both Campion and Coen will likely receive Best Director nominations, and many critics consider her a favorite for winning it. In terms of acting, reviewers praise Kirsten Dunst from The Power of the Dog, who garners even more critical chatter than Benedict Cumberbatch. As for Macbeth, Denzel Washington and Frances McDormand both make shortlists for best actor and actress nominations, respectively.

With that out of the way then, I want to talk about something different from directing and acting: cinematography. Bruno Delbonnel (Darkest Hour, Amélie) shot Macbeth in black-and-white, the film projected in the only slightly rectangular Academy Ratio (1.37 wide to 1 high). Ari Wegner (Zola, the TV series The Girlfriend Experience) shot The Power of the Dog in color and widescreen (2.39 wide to 1 high), as appropriate for a film which evokes – while undercutting – its links with the Western genre. Though both films make effective use of facial close ups, Macbeth relies on almost Expressionist set pieces seemingly drawn with light and shadow, while The Power of the Dog features realistic sets and often bright colors to paint extensive landscapes (New Zealand standing in for Montana).

The Power of the Dog tells the story of a brutal rancher, played by Cumberbatch, who owns a ranch with his brother (Jesse Plemons), both raised by an almost mythic, though deceased, father-figure cowboy. That father-son relationship remains alive, because part of the stable, complete with a saddle which Cumberbatch lovingly polishes, acts almost as a shrine to the now-gone cowboy. Cumberbatch responds tyrannically when his brother marries, taking it out on his new wife (Kirsten Dunst) and her son (Kodi Smit McPhee). Cumberbatch employs every weapon at hand, like music to unsettle Dunst, and intimate friendship to manipulate Smit McPhee.

In true homage to the visuals of the Western genre, Wegner captures expansive panoramic vistas that evoke John Ford’s films. The camera unobtrusively follows the action of people, horses, and cattle in wide exterior shots. The interiors at times fill with character portraits, now hard, now warm, in close and medium shots.

Maleness permeates the film, from the brothers’ sibling rivalry to the group dynamics of the ranch hands, from the conflict between Cumberbatch and Smit McPhee to the enigmatic relationship between Cumberbatch and the cowboy who raised him. In one iteration after another, the film asks the question: what does it mean to be a man? The narrative’s answers remain suggestive. Is masculinity found in the marriage between Plemons and Dunst? The cowboy mythology and male bonding of the ranch hands? The implied same-sex eroticism? The powerful script, redolent with these conflicts of repressed desire, carefully seeds details that culminate in one of the most inventive, yet understated revenge plots ever filmed. These characters rarely react as expected, and the ending offers quite a twist.

Where The Power of the Dog goes for the panoramic, Macbeth aims for the claustrophobic. Shakespeare’s play, much truncated here, tells the story of Macbeth who, driven by the cryptic prediction of the three witches, and spurred on by his wife (McDormand), kills Duncan, king of Scotland (Brendan Gleeson, a great actor; check out his 2014 film Calvary). Feelings of guilt for this murder and subsequent killings of Banquo and others drive Lady Macbeth and, to a lesser extent Macbeth himself, to the brink of madness.

The camera moves less here than in The Power of the Dog. The film, shot in black-and-white, uses the only slightly rectangular Academy Ratio (1.37 wide to 1 tall), whose square-ish shape emphasizes the frequent close-ups on faces that convey so much emotion and create such interiority for the characters. Macbeth’s action takes place within stylized sets – minimalist, yet gigantic and domineering – that use forced perspective along long corridors and rows of doors or windows to illustrate the narrow paths that characters walk in this bloody tale. Shots from above – the sets almost never show ceilings – situate the characters in space, stuck in place, yet simultaneously advancing toward their ultimate fates. Favorite moments include the “Is that a dagger I see before me” and the “bubble, bubble, toil and trouble” scenes. Keep an eye out for Lady Macbeth burning the treasonous letter!

Composing in master scenes reminiscent of Yasujirō Ozu, Coen cuts infrequently. Delbonnel relies on slow moving dolly shots and wide-angle lenses as characters walk in and out of frame, overexposing the foggy backgrounds while transitioning from scene to scene. These transitions disorient the viewer, simultaneously linking the scenes together and distorting our sense of time as we move from one scene to the next, constantly surprised by images of birds or reflections in glass and water.

Finally, a couple of thematic things to consider. First, both films show the influence women can have on men. Positively in The Power of the Dog, as Dunst brings love and family connection in her relationship with Plemons. Negatively in Macbeth, as Lady Macbeth pushes her husband to commit murder, though viewers balance her culpability here against Macbeth’s own desire to act on the witches’ prophecy and seek the throne. Next, both films feature sons seeking revenge, Duncan’s son Malcom (Harry Melling, familiar from various Harry Potter films) in a visually stunning showdown with Macbeth, and Kodi Smit-McPhee in the ingenious ending of The Power of the Dog.

Oh, and just in case you hadn’t already heard: when on screen, Macbeth’s witches steal the show!