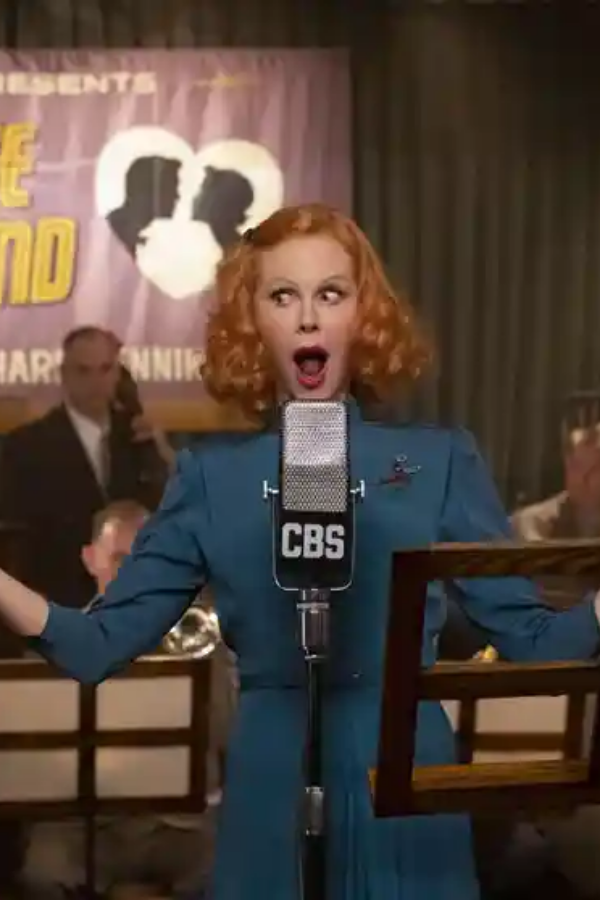 (Being the Ricardos, Last Night in SoHo)

Recently, I wrote about the ways holiday films use the past to evoke nostalgia. Two very different recent films also take viewers on trips back to yesterday, where what has come before reflects our society today.

Being the Ricardos, starring Nicole Kidman as Lucille Ball and Javier Bardem as Desi Arnaz, recreates a week in the life of what was then the era’s most prominent television couple. It’s scripted and directed by Aaron Sorkin, who won an Oscar for writing The Social Network and received a nomination for directing Trial of the Chicago 7.  Set in 1952, Being the Ricardos dramatizes a conflict with Joseph McCarthy’s House Committee on Un-American Activities, as politicians confront Lucy about her Communist Party membership. Problems arise when the secret interview becomes public.

Just as provocative as Lucy’s politics, though, was the controversy surrounding the birth of her child and the decision to dramatize this family affair in the show itself. This at a time when television avoided even saying the word “pregnant,” let alone including the experience in the plot of a top-rated program that provided rich advertising revenues. And if that isn’t conflict enough for any film, all of this affects the financial future of Desilou Productions, the company founded by Ball and Arnaz, while at the same time infidelity strains their marriage.

Sorkin takes artistic license and the film at times strays from the historical record, as Being the Ricardos follows one week’s show from rehearsals to performance, giving audiences a behind-the-scenes look at early television – on stage and off. The bright palette of the production design brings the era to life, ironically using color to highlight the dark side of the 1950s, a period idealized by some as an American “Golden Age.”

In Last Night in SoHo, a contemporary fashion designer time-travels back to London’s swinging 1960s, where the clothes inspire her designs, and the haunted goings-on threaten her life. Helmed by Edgar Wright, perhaps best known for directing the satirical horror film Shawn of the Dead and the fast-paced, auto-centric heist thriller Baby Driver, this recent effort also boasts his trademark energetic editing and moving camera shots. The script by Krysty Wilson-Cairns, who shared writing credit and an Oscar nomination with director Sam Mendes for his World War I film 1917, contrasts the luxury and glamour of today’s fashion scene with that of the free-spirited Sixties. Beyond the showy visuals, however, lies a grim mystery that transports this tale firmly into the realm of horror.

Both of these films remind today’s movie-goers of how connected we are to the past, for better or worse. The McCarthy-era redbaiting presented in Being the Ricardos finds an echo in today’s virulent politics. And the fashions of the Sixties and Seventies, reinterpreted by current designers, now grace both high fashion runways and hometown malls alike. The stunning costumes and art direction, not to mention the outstanding cinematography, provide strong reasons for seeing these films on the big screen.