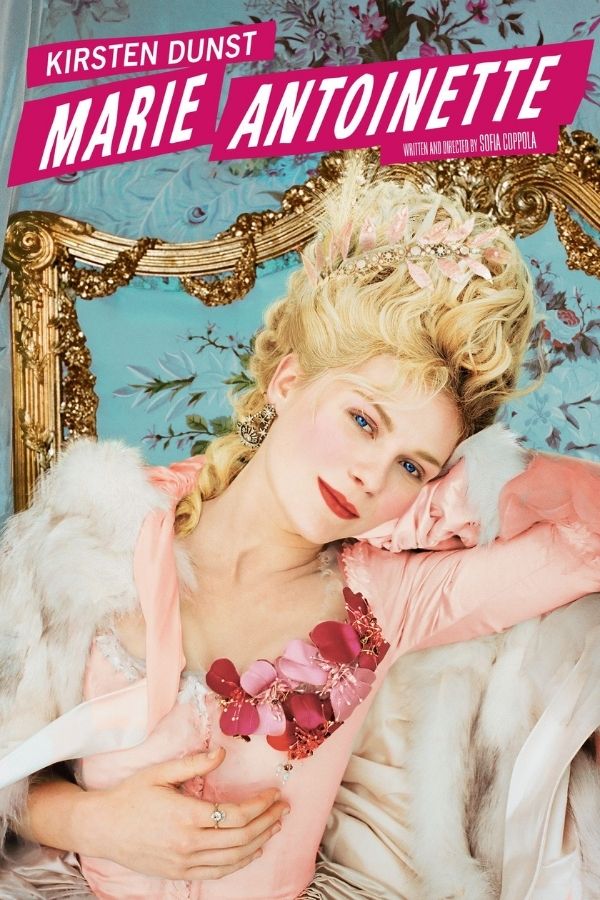 Legend has it that Marie Antoinette, when confronted with the poverty of breadless peasants, reportedly said “let them eat cake.” This is one of those “facts” that we all know about the eighteenth-century French queen, and it’s actually not true. For the many who see her in a negative light, Sofia Coppola’s Marie Antoinette introduces us to a naïve girl out of place amidst palace intrigue. The movie focuses little on public events in the wider world and concentrates almost entirely on the domestic and psychological struggles of its title character.

Then as now, that wider world proved a complicated place. In the wake of shifting political alliances following the Seven Years War (1756-1763), Marie’s mother, Habsburg Empress Maria Theresa, cemented the alliance with Austria’s former enemy, now ally, France by marrying her daughter into the royal family. Marie’s purpose was to bear a son who would unite the two kingdoms, something she’s at first unable to do because her husband is more interested in locks and locksmithing than he is in consummating their marriage. The movie follows this generally unhappy relationship, a subsequent bittersweet love affair, and the birth of her children, ending with the French Revolution.

Grand historical events merely provide background here, for the motion picture really focuses on Marie. As Coppola said in an interview, what interested her about the story was not geopolitics, but rather that “these people, who had to control a country, were in fact only teenagers.” After all, Marie’s just 14 when she marries Louis-Auguste, the Dauphin of France and heir to the throne. And she becomes queen of France before turning 20. At the same time, life in court presents challenges and requires adjustments. So, according to Coppola, “Marie Antoinette confronted…the same problems as a high-school girl,” making friends, handling bullies and uncomfortable situations, learning unfamiliar social rules (https://i-heart-sofia.livejournal.com/141874.html).

When leaving her home for France, Marie carries nothing with her, forbidden to bring along childhood friends or even her favorite dog. Coppola movingly shows the girl’s isolation and fragility as strangers strip off her Austrian clothes and replace them with French attire. An outsider inside the French court, Marie encounters hypocritical, hyper-elegant manners, as well as preposterous protocols. For example, while giving birth, all the court surrounds her bed, watching what we might consider an exceedingly private moment.

Naturally, recreating onscreen the architecture, furnishings, and costumes in a period piece like this required tremendous artistry from Production Designers K. K. Barrett and Véronique Melery. The film had dozens of wig makers (note the skyscraper headpiece that raises Marie’s hair to amazing heights) and opulent costumes, for which Milena Canonero won an Academy Award. Breathtaking cinematography by Lance Acord captures Versailles and the other authentic locations used, shooting Marie’s wedding scene in the very chapel where the queen actually got married.

Still, “it is not a lesson in history,” said Coppola, who emphasizes that point by using deliberate anachronisms (things that appear in time periods to which they do not belong, e.g. the clock in Shakespeare’s Julius Caesar.) Here, the movie features anachronistic props and costumes, music and accents. The score includes incongruous musical choices, blending classical works by Vivaldi with Techno and songs by The Cure, Siouxsie & the Banshees, and Adam and the Ants. At a key dramatic moment, Kirsten Dunst’s Marie belts out the Johnny Mercer tune “Fools Rush In.”

That same incongruity appears when the court ladies try on endless pairs of shoes by Manolo Blahnik and Pompei, hidden among which lie Converse sneakers. The patisserie Ladurée, first opened in the late nineteenth-century, provided the macarons and other pastries for a sequence fairly bursting with color, delighting the audience with images of deserts so sumptuous that we can almost taste them. These beautiful shoes and sweets serve a thematic purpose, of course. Though the scene presents a masterful celebration of consumer society, it also shows Marie substituting the superficial satisfactions of the material world for the deeper pleasures of the happy emotional life unavailable to her.

In a movie rich in subtext, a few moments deserve particular attention. In two scenes Marie, perhaps more clueless than ironic, plays at farm life in both her chateau and onstage in a court entertainment, a bit outré given the era’s widespread poverty. She also reads to her court ladies a passage from Jean Jacques Rousseau about the corruption of the “noble savage” by modern society, a society perfectly illustrated by the shoe and pastry scene.

Two art references also catch the eye. When bored at a party, Marie thinks of her lover, anachronistically imagining him in the pose of Jacques-Louis David’s celebrated Napoleon Crossing the Alps, painted between 1802-1805. (https://en.wikipedia.org/wiki/Napoleon_Crossing_the_Alps#/media/File:David_-_Napoleon_crossing_the_Alps_-_Malmaison2.jpg). Another shot pictures one of the era’s most successful female artists, Elisabeth Louise Vigée Le Brun, painting the royal mother and family, their postures suggesting the 1787 Marie Antoinette and Her Children (https://www.metmuseum.org/art/collection/search/656654).

As a director, Coppola has broken a lot of new ground. Among other awards, for Lost in Translation (2003) she was the third woman nominated for a Best Director Oscar, for Somewhere (2010) the first American woman to win the Venice Film Festival’s Golden Lion, and for The Beguiled (2017) the second woman to win Cannes’s Best Director Award.

Dunst, in addition to various Spider Man movies, appeared in The Virgin Suicides (1999), also directed by Coppola, as well as in Eternal Sunshine of the Spotless Mind (2004) and Melancholia (2015). Most recently, she received a Best Supporting Actress Oscar nomination for The Power of the Dog (2021).

Louis XVI is played by Jason Schwartzman, familiar from his work with Wes Anderson, which includes Rushmore (1998), The Grand Budapest Hotel (2014), and The French Dispatch (2021)

Coppola’s background as a model and actor influences her directorial eye, and the film’s lavish sets and costumes delight the viewer. Anachronistic touches shake up audience expectations, keeping the focus less on the history and more on the queen. Though light on plot and deliberately impertinent, Marie Antionette satisfies with the atmosphere it creates, focusing on experiences to which many can relate: loneliness, alienation, unreasonable expectations. Overall, the film explores the difficulties that arise when a person must appear in the public eye, at the same time lacking the resources necessary for the development of a healthy emotional life.

Schmidt’s film credits include serving as Assistant Producer on “The Silence,” an American Film Institute production nominated for a 1983 Academy Award best short dramatic film; writing a screenplay for Deja Vu, a 1984 Cannon Films feature starring Jaclyn Smith, Nigel Terry, Shelley Winters, and Claire Bloom; and writing  the story for the “Tommy’s Lost Weekend” episode of the Warner Bros. sitcom Alice, nominated for a 1985 Emmy Award and awarded a 1986 Letter of Commendation from Los Angeles County for its treatment of teenage alcoholism.